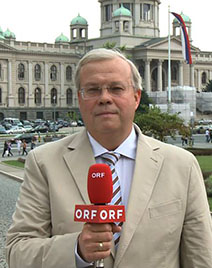 Member of the IISS (International Institute for Strategic Studies) for years, and RUSI (Royal United Services Institute) in London

I finished elementary school in July 1972.

I graduated from High School in 1980 in Graz.

From 1980 to 1981 attended Militia Officer Training School, and was subsequently PR officer in Theresianum , a private high school in Vienna. Present military rank: major. In 1994 took part in a special Army exercise in Graz, as well as military foreign languages school in Russian and Ukrainian.

In 1981 thru 1985 attended Law School and Institute for Slavic Languages in Graz.

In 1984 performed four-week volunteer work for Kleinen Zeitung, a written media in Graz.

Awarded the title of Master of Law in November 1985. The master’s thesis topic was “Joint stock regulation as an analogue basis for the right of savings banks to organize”.

In 1985/86 attended a basic four-week journalist course, as well as public course for journalist education with the same school.

From July to October of 1986 received a scholarship from South Africa Foundation and worked with the Webber & Wentzel law firm in Johannesburg, South Africa.

In March/April of 1988 traveled to UK and Hungary with the Austrian Journalist Club and the Journalist Education Committee.

In July of 1988 volunteered for four weeks in the foreign politics section of the Neue Zürcher Zeitung. Since then, wrote numerous reviews for this edition published in the „Political

In September of 1988 traveled for a week around the NATO centers in Brussels, Frankfurt and Naples on the invitation of the US Embassy.

April 1989: A four day trip to Moscow and a meeting with, among others, EIC of „Izvestia“.

In June of 1989, a week - long trip to Libya to commemorate the twentieth anniversary of the „Return of the Revolution“.

In October 1989 visited East Germany for a week and attended the fortieth anniversary of DDR. In 1990: a trip to Japan with the Austrian Journalist Club.

Attended the session of the Berlin Political Club in October of 1990 in Athens, Greece. The topic’s were “Expansion of EU to the South”, “NATO South Wing Mediterranean Policies”.

Francais des Relations Internationales“. The subject was the effect of the unification of Germany on European security policies. This was succeeded by a trip to Cyprus on the behest of the Cypriot Government.

December of 1990: the Berlin Political Club in Berlin on the security policies in Europe. January 1991: A week long journey to Hong Kong.

In May 1991 joined Teletext section of ORF (Austrian Radio & TV).

In January of 1992 transferred to ORF Radio news section as editor of world news, as well as the editor for a radio program called Blue Danube.

In February 1992 attended the annual session of the Academy of Security and Cooperation (ASZE) in Berlin. Session topic was European Integration Process.

In April of 1992 took the first trip to Kiev, Ukraine.

In July/August of 1992 conducted research on the study „Ukraine on the path of becoming a regional power in East Europe“.

In October 1992 attended the Institute for Security Studies conference of the West Europe Union in Paris on the military and political situation in Europe with attention to the crisis in Yugoslavia.

In February 1993 attended the annual Security Academy and European Cooperation. The subject was European Security.

In June 1993 enlisted in a 14 day French language improvement course in Cannes.

August 1993: revisited Ukraine on a four-week academic trip to Donieck, Southern Ukraine. In 1994 (March-April) another visit to Ukraine, this time to Chernovic (Western Ukraine). The purpose of the trip was improving my Ukrainian language.

June 6th to September 16th 1994: A tour with the Austrian Military intended as completion of training for a military translator from Russian and Ukrainian languages.

In August - September of 1995 visited Ukraine again for three weeks.

On January 22-23 1996 took part in a session of the Stiftung für Wissenschaft und Politik (Fund for Science and Politics) in Ebenhausen on Russian foreign policies. On this occasion, I gave a lecture on Russian – Ukrainian relations.

August 1996: a voluntary participation in a military exercise in the Austrian Embassy in Kiev.

On January 20-21 1997 attended Stiftung für Wissenschaft und Politik conference in Ebenhausen on current German interests in regard to changes in the world politics (beginning with NATO expansion to the East, to the situation in East Asia).

November 13th 1997: lecture on „The Role of Media in International Crisis Situations“that was a part of Landesverteidigungs-Akademie (Academy for the Defense of the Country), which is the leading institution in the field of research and education of the Austrian Military. The topic was “Armed Forces and the International Crisis Management”.

November 14th to 21st 1997: in response to an invitation from the Center for Independent Journalism, one of the Soros Fund institutions, visited capitol of Moldova Chisinau. The purpose of the visit was the seminar on radio news that was attended by 17 other radio journalists.

On November 24th 1997, moderated a one-day seminar on the subject of security politics and Austria as an financial destination. The organizers were Academy for the Defense of the Country and the Österreichische Gewerbeverein (Austrian Chamber of Commerce).

August 1998: one month experience in the Foreign Politics division of ORF Radio.

October 1998: a one-week trip to Central Ukraine with the head of the Franciscan Mission to Central and Eastern Europe. During the visit numerous Franciscan monasteries were visited.

Form October 25th to November 25th in 1998 I was awarded a one month scholarship for the Duke University, North Carolina. The scholarship was awarded thru Austrian-American Foundation.

December 20th to 23rd: a visit to the victims of the floods in the Carpathian Ukraine accompanied by the head of the Franciscan Mission to Central and Eastern Europe. The story was later published Kleine Zeitung.

In March 1999 attended a ten day improvement course in Hungarian language that was held in Berlitz.

In June 1999 transferred to ORF TV in preparation for the position of third correspondent to Brussels. A month long training ensued in the foreign politics departments and news programs Zeit im Bild 1 and Zeit im Bild 2 (daily main news program).

June 1999: presentation of Ukraine and the EU presentation at the round table organized by Academy for the Defense of the Country.

From August to December 1999: third correspondent to Brussels, numerous visits to the European Parliament in Strasbourg and trips to Luxemburg (European Court of Justice, sessions of the Council of Ministers, ministers of foreign affairs meetings and defense matters of The Western European Union). All together, I contributed with 15 TV stories and 65 radio stories.

December 6th – 7th 1999: intensive seminar at the Academy for the Defense of the Country for officers for foreign languages. The subject was news analysis. Attended the seminar as the guest lecturer talking about war radio & TV correspondence from the ORF perspective.

January 2000: invited to lecture by the Steier Militia Union on the subject of “Russia in the Eve of Presidential Elections”.

December 1999: preliminary appointment for Chief Correspondent to the ORF Belgrade Office. February 14th 2000: an official trip to Belgrade on behest of ORF and the preliminary assuming of the office.

May 1st 2000: appointment to the Chief ORF Correspondent to Belgrade.

May – June 2003: a three-week stay in Tirana and the attendance of an intensive course in Albanian language.

The job description of the Belgrade Chief Correspondent consists of reporting on Serbia, Montenegro, Macedonia, Bosnia & Herzegovina, Croatia, Slovenia and Albania. This job involves frequent travel in target countries. It also involves managing the Belgrade Office. At the moment of my appointment, the Office was unattended for several months because of the political situation in Serbia. It required a complete reorganization and building a complete journalistic infrastructure in Albania, and other former Yugoslav republics. It involves negotiating all contracts on leases and personnel.

23 January to 31 January 2014: Special mission in Kiev on the occasion of the riots in Ukraine From md February on Christian Wehrschütz was reporting from all hot spots in Ukraine, including Crimea and the Donbas-region during the war.

In autumn 2014 he was appointed to the first correspondent of Austrian Television covering Ukraine from Kiev. He is now chief-correspondent for Ukraine and the Balkans.

June, 12 -15 / 2017: Participation in Kazakhstan at the Panel-Discussion in ASTANA, organized by the Austrian Chamber of Commerce (Interview with the foreign minister):

Wehrschütz has also participated in the publication of two books, written by all correspondents of the Austrian Television.

Numerous articles (of mine) were published in social, foreign politics, security and media subjects. The outlets in which I was published were Neue Zuricher Zeitung (as a guest commentator) Presse, Austrian military publication OMZ, Standard, Defense International and Wiener Journal. As a guest commentator, I was published several times in Kleine Zeitung (weekly). Since my appointment to the Belgrade ORF Office, I continue to contribute to both Kleine Zeitung and Wiener Zeitung. I also lecture on numerous seminars in Austria, and moderate numerous manifestations on the subject of Balkans and Ukraine.

Austrian State Award for journalistic achievements in the interest of spiritual defense of the country. It was awarded to me in October 2000 by the Austrian Ministry of Education, Science and Culture.

2012 Wehrschütz and all other correspondents of ORF have been awarded with a special “Romy” by the Austrian newspaper “Kurier” for their work abroad. 2014 Wehrschütz was nominated for this award because of his work in Ukraine.

2014 Wehrschütz was elected Journalist of the year because of his war-reporting from Ukraine.

2022: Großen Josef Krainer-Preis in recognition of achievements in journalism